What is this Fantasy Football thing? I have no idea. Today I was a part of my first Fantasy Football draft with Church 29:11 at Buffalo Wild Wings at Gardendale.  But with Jeff’s directions I drafted 12 players for a fantasy team. Jeff had me prepared with draft sheets that listed the players, I couldn’t keep up with marking them off as they were drafted, but we managed to draft for myself, Tyler and two friends that are playing . Jeff had his own sheet for the team that he is managing. I don’t think he knows that I failed ALL the sports tests that I had to take in gym class in high school. So……….we’ll see how this goes. I’m lost and it hasn’t even started yet.

It was SOOOO HOT!!! on the patio at Buffalo Wild Wings. They had the fans on, but it was still so, so hot. The waiter said that he didn’t know how we stayed out there so long. He made sure that our drinks stayed full.  The draft went on for a little over 3 hours. After we left Gardendale we went to Bluff Park Creamery for ice cream. I had a scoop of chocolate with brownie bits, Jeff had a shake made with zanibar chocolate ice cream. 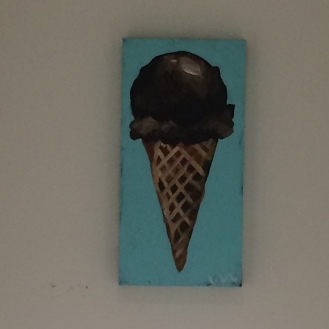