There are restaurants constantly opening up around the Birmingham area. As we read articles, drive by a new one or find out about a new one we put it on our list of places to check out. When we are looking for a different place to eat we’ll go to our list and look them up to find and see what their menus look like. Would it be a place we are interested in, or should we just take if off the list? Unfortunately a couple places on our list have closed before we got the chance to visit.

One of the places that we found by driving by is Martin’s Bar-B-Que Joint in Cahaba Heights. We decided to try it out this past Friday. We got there early and found that they have a parking lot beside and also parking behind the restaurant. We just popped into the lot beside since it was a quick turn off the road we were on.

I like to get a smoked chicken sandwich but they didn’t have one on the menu, so I opted for a sliced beef brisket sandwich and went with a side salad. My first choice of dressing I was told that they didn’t serve, apparently the same menu is used at all of their restaurants. So I went with the Comeback Sauce. It was a little spicy for a salad dressing, so I used it sparingly. Jeff went with the Pimento Cheese Burger with a side of macaroni and cheese. He said it has more pimentos than cheese and was a little undercooked for his liking. 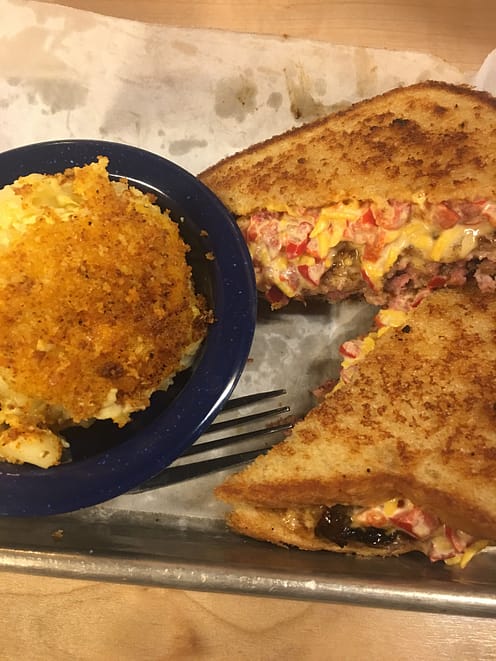 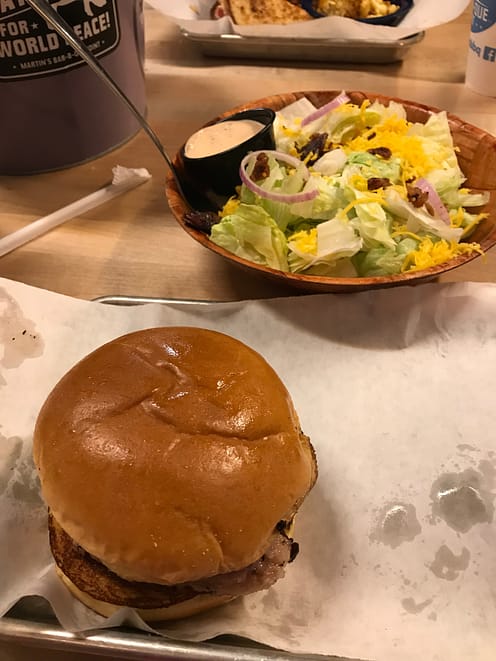 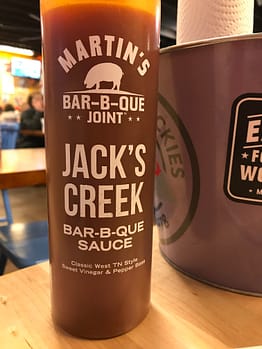 They gave us the table number and you’ll notice that it says it has a GPS locater, well apparently that isn’t working since the ones delivering the food for you table would yell out the numbers and you had to acknowledge so that they knew where to bring. I guess that isn’t up and running yet.

There decor is interesting. I went to the restroom and they don’t say men and women they just have a picture of Farrah and JR on the doors.

As we were leaving we realized that there is a creek that runs under the restaurant, that was neat.

The food and atmosphere were good and we’ll definitely be going back to again!