We finally made a trip to Mobile to see a Mardi Gras parade! It was a rainy day, but thankfully the rain held off during the parade.

We parked in an all day parking lot in downtown Mobile and then started our day on foot. Our first stop was for breakfast at A Spot of Tea. Tyler and Amy had been there before, but it was our first time. I had a waffle and a side of ham and eggs, Amy ordered a pecan waffle but it came plain, so the waitress went back and got her some pecans and said that she was having the cook to make her another (it never came out). Tyler had a Monte Cristo sandwich and Jeff had eggs, sausage and what was to be waffle sticks, but came out as half a waffle. The food was very good. (There are no pictures of the food because we were so hungry.) 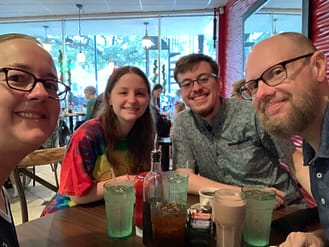 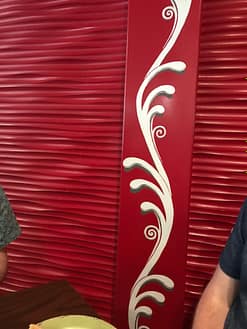 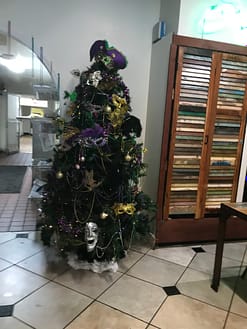 Then we walked around downtown Mobile for a bit.

We then made our way to the house that Tyler and Amy’s church had for the gathering. We got to meet the pastor and others from their church. They were all very friendly and welcoming. Everyone brought something, we had hamburgers and hot dogs and all sorts of sides and desserts. Then it was time for the parade to start.

There were lot of kids on the floats, and several bands from all over. One band was from Autauga county. Some bands had adult members and some high school kids. There was one band that had a few kids that looked really young but they were marching and playing.

There was a variety of items thrown from the floats. There was of course beads and moon pies, fudge rounds, oatmeal cream pies, stuffed animals, balls, frisbees, and Ramen noodles. I got hit in the head with a moon pie, never knew it could hurt like that. Behind us was a puddle of mud that ran the length of the street. Lots of things were overthrown and ended up in the water.

Did you know that Mardi Gras was started in Mobile? “Before New Orleans, there was Mobile, Alabama — the birthplace of Mardi Gras in America. Mobile, founded by Roman Catholics from France in 1702, was home to the first mystic society, or “krewe,” which held America’s first Mardi Gras celebration in 1704 — 14 years before New Orleans was even founded. More than four centuries later, those krewes are still responsible for the vast majority of parades and balls of Carnival.

The parades start 18 days before Mardi Gras and are family-friendly — in stark contrast to that other city. Float riders toss doubloons — aluminum coins embossed with the society’s name, year of founding, and emblem on one side and the year of the parade on the other — as well as beads, candies, plastic trinkets and moon pies. Especially moon pies. Some 3.5 million moon pies will be tossed to the crowd during Carnival.” Taken from a Fox New article.

We had a wonderful time with Tyler and Amy attending our first Mardi Gras parade and trying Spot of Tea.  We look forward to going again.