We recently checked out the new Premiere Cinema at Pell City.  It is nice to have in the area. There is a small bowling alley, arcade, ropes course and pretty awesome food area and like 7 theaters.  There is self-serve popcorn, cheese for the nachos and drink fountains. This is the first time that we have ever seen the sweet tea as part of the fountain. It is the Gold Peak brand which Jeff likes. 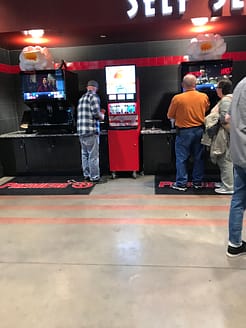 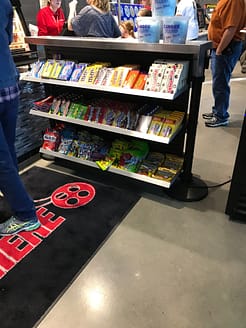 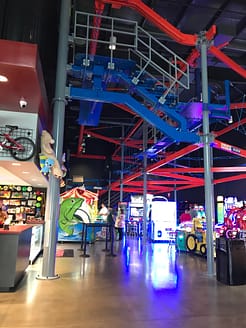 The theater has reclining seats, but I find that in moving around in the seat that the footrest moves gradually down, they don’t seem the same quality other theaters. You have controls to recline and to adjust the headrest. They aren’t heated as some of the other theaters. You do have a USB port in the controls for the chair, so you can charge the phone that you aren’t supposed to use during the movie. LOL! We sat on the bottom row behind the bar and once the seats were reclined there didn’t seem to be enough room for someone to comfortably walk by to exit the row.

The seat controls
The seats have a movable tray with cup holder. You can place an order in the lobby and have the food delivered to your seat.

I knew we were heading to Pell City, so I did a quick google search of local places to eat and Dock’s Restaurant came up. So after the movie we headed over. We found it to be meh. It wasn’t anything special but it was lunch.

I ordered the pimento cheese cheeseburger. When the server brought it out she said that it had been a popular item that day and that they had to make the pimento cheese. (Based on the current customers in the place, not sure that I believed that statement.) So if you have ever had fresh pimento cheese then you know it’s not the same as one that has had time to sit and marry. So it was basically just a cheeseburger since I could not taste the pimento at all.

We also had the Boathouse French Fries. They are fries with cajun seasoning topped with cheese and bacon and are served with ranch dressing. They were pretty good. I was expecting them to be a little spicy but they weren’t.

Jeff had a grilled cheese with bacon. They bacon wasn’t crispy enough for him, so he ended up taking it off his sandwich.

This was a place to say we’ve been once. We’d go back if invited by friends or something, but is not a place that we’d made a special trip back for.

We did enjoy the movie and day date though!